No turning back for the Rwandan actress! 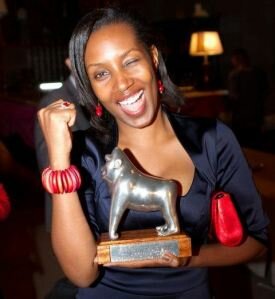 Cleo holds her awards at the 2011 Rwanda Film Festival

Cleophas (Cleo) Kabasiita’s face is familiar to all fans of Rwandan Cinema. You may remember her for her lead role in the 2001 movie 100 Days or the 2004 Sometime in April, in which she played Valentine.

She has acted in movies that have won international awards and even won best actress award in the local Silverback Awards for her role in Kinyarwanda.

The movie, her fourth, premiered at the Rwanda Film Festival (RFF) that was held between Julyn16 through July 30, 2011. Earlier this year, it won the World Cinema Audience Choice Award at the Sundance Film Festival in the US.

Born and raised in Uganda, the Rwandan-Ugandan’s interest in film dates back to her teenage years. She acted in school plays and wrote scripts at O-level.

“Judging from the reaction of the audience and the head teacher, I knew it was something I could do,” she says.

Cleo says she stumbled upon her career in film. While on recess from university, a friend working on the set of 100 Days invited her to watch the auditions. Mistaking the stage entrance for the back door, where she had hoped to slip in quietly, she found herself face to face with the judging panel.

“I tried in vain to excuse myself,” says Cleo. “But the directors insisted I read the script.”

They were impressed. She beat competition from hundreds of other girls to earn the lead role. Her first time in front of a camera was during the training for the movie, says the actress, who describes herself as shy. “Interestingly, it came so naturally,” she shrugs. “We had to make up our own lines based on what the audience suggested and I wasn’t nervous at all.”

Cleo says she gets into character effortlessly, although some roles call for a longer preparation time. She is lucky, though to have worked only with professional directors who understand this and accord her the space she needs.

Reflecting on her first movie, Cleo says she can’t quite tell if she was relaxed. When I suggest she watch the movie to find out, she shakes her head emphatically.

“I never watch my films unless I am forced to attend a premiere,” she says. “I keep thinking there is something I could have done different.”

Like an unbiased parent she rejects the idea that a particular movie was more compelling than another. “Here is the thing,” she tries desperately to convince me. “Different roles allow for different things.”

For her role in Kinyarwanda she felt she had matured as an actress while Sometime in April, allowed her a range of emotions to showcase her ability.
She had reservations about 100 Days however, after she learnt she would have to do a kissing scene.

“I swore that there was no way I was kissing a guy that wasn’t my boyfriend. We were filming in Kibuye when I found this out and I called my aunt who I was living with in Kigali at the time, to let her know about the kiss.”

Her aunt was open-minded, reminding Cleo that she had signed up for the part and needed to see it

“I thought ‘yuck’ but recalled the hundreds of girls who never made it to the part. Since the directors had entrusted me with the part, I had to give it my best.”

Cleo, however, points out that she would never take part in a movie that featured nudity or violence.

She explodes with laughter when asked if she feels she is the face of Rwandan cinema. “Certainly not” It’s a very young industry and although I have probably done more films than any other girl, I don’t think we have a Rwanda film face yet.

Yet she has been recognized on the streets, but uncharacteristically for actors puts this down to the fact that she has lived in Kigali since 1995 when she returned to attend university.

Cleo who has acted with Hollywood A-Lister Idris Elba, acknowledges the growth of Rwandan cinema over the past few years.

“Every year there’s a huge achievement especially with no budget to speak of. As part of this year’s film festival, eight members of the Academy of Motion Picture Arts and Sciences were invited for an educational and cultural exchange with Africa Filmmakers.”

She says there are huge opportunities that need financial backing. “There’s so much we can do right from our only local television station, which has no running series or entertainment.”

The mother of two (Darrell 9, and Cristal

regrets that her children haven’t seen any of her movies.

“I haven’t let them watch them because unfortunately, I have only acted sad movies. But they know I act and my son says he wished I could act in funky movies so he could see me on DStv.”