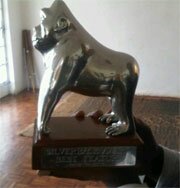 The dawn to the New Year was celebrated with pomp and joy in different parts of the country. Eric Kabera, the chairman of the Rwanda Festival (RFF), chose the occasion to announce the 8th edition of the festival. “During this year, the festival will work under the theme My Voice, My face, My soul, My Identity. We are looking forward to receiving films from all over the world that reflects this theme.” Mr. Kabera said.

“Our mandate is to explore this theme using cinematic power as we bring forward images from different parts of the world to empower our sense of seeing, feeling and belonging” he adds.

The annual event involves taking movie lovers on a cinematic journey with international film screenings from around the globe. RFF is the Rwanda’s only prestigious film festival. For years, it has showcased films from all parts of the world, representing such countries as Egypt, Ethiopia, Brazil, Kenya, Uganda, United States, South Africa, and of course, Rwanda. With the pulse on the international film market, RFF has opened the minds of its audiences, and transported them to lands far away and back home again.

As usual, the two weeks festival will be broken into two parts; hillywood (Upcountry) running from July 14th to July 20th and Kigali Festival from July 21st to July 28th, 2012. “We can hardly wait to see what this edition has in store for us since filmmakers from around the world have become sophisticated in telling their stories” says Christian Gakombe a film officer for RFF.

Eric explained the urgency to explore other places, spaces, civilization and cultures so that we can find the commonality of our identities as human being despite the challenges of the 21st century.

Currently, RFF is accepting submissions of independent features, shorts, narratives and documentary films. Applications are available via the RFF website at hillywood.org, by emailing [email protected] or calling +250 722306480.

Submission:
Submission will be accepted from January 2, 2012 through March 31, 2012. Late submissions will be accepted until May 1, 2012. Official selection announcements will be made beginning June 1, 2012.
About the Rwanda Film Festival

Rwanda Film Festival was founded seven years ago by the acclaimed Rwandan film director/producer, Eric Kabera (“100 days,” “Keepers of Memory” and “Africa United) The Festival is gearing up for its 8th year of screening more than 100 films from Egypt, Ethiopia, Brazil, Kenya, Uganda, United States, South Africa and Europe.

RFF believes film and art can lead to better understanding and foster communication between peoples of diverse cultures, races, and lifestyles, while at the same time, serve as a vehicle to initiate dialogue on the important issues of our times.